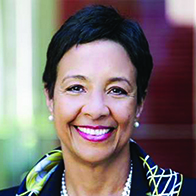 Minnie Baylor-Henry recently served as Worldwide Vice President for Regulatory Affairs, Johnson & Johnson. She has served as Consultant in the Life Sciences Regulatory Practice at Deloitte & Touche LLP based on her extensive expertise as Johnson & Johnson Vice President for Global Regulatory Affairs, Over the Counter products; and as Senior Director, Regulatory Affairs. Before joining Johnson & Johnson, Minnie served as the US Food and Drug Administration Director of the Division of Drug Marketing, Advertising, and Communications, and as the US Food and Drug Administration’s National Health Fraud Coordinator. A pharmacist and an attorney, Minnie received her pharmacy degree from Howard University and her JD from Catholic University. She has been a longtime member of DIA and has served as President of the DIA Board.