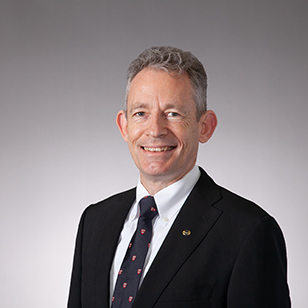 When did you realize you wanted to become a physician?

My high school chemistry teacher, Paul Fore, was the biggest influence on my career path. He awakened an interest in chemistry in me, and I found the molecules that fascinated me most were those related to medicine and disease. In college I concentrated in chemistry under E.J. Corey, who again encouraged me in science but mostly insisted that I follow a career that would have an impact on the world. I turned to medicine because I thought it had the most interesting applications for the chemistry I had enjoyed.

How did you come to work at a pharmaceutical company in Japan?

I graduated from medical school early in January 1990 and found work at a pharmaceutical company in Japan—basically as an English checker for the company’s first IND submission to the FDA—to fill the time until the start of residency at the end of June. Although my focus had been on finding a way to live in an exotic location, I was amazed at the resources available in companies for discovering and evaluating new medicines. I arranged to return at the end of my residency in 1996 with the intention of learning GCP for a year before returning to the US for a career in academic medicine. My work at the company really took off; we had the first approvals in the US and EU for two of the compounds I had worked on in 1990, and I enjoyed working with colleagues internationally while seeing what happens when a new medicine comes to market.

If you could wave a magic wand to make one radical change in our current practice of regulatory science, what would you do?

Where do you see your field going? What is your vision of the field in 2030?

I think we are entering a new golden age of drug approvals, especially for diseases which are now more narrowly defined by their molecular characteristics. In many cases those diseases are so rare that the number of patients who will immediately benefit is small, but I think this is a further step toward a future where drugs are approved based on increasingly better characterization of the target patient population.

Is there a book you would recommend to fellow DIA members?

The Aspirin Wars: Money, Medicine and 100 Years of Rampant Competition by Charles Mann and Mark Plummer remains a favorite for me. Reading it, one is reminded of the fascinating history of drug development and that the issues we face today regarding every aspect of pharmaceuticals (drug safety, patent protection, manufacturing quality, pricing, cross-border importation, etc) were equally active a hundred years ago.

What advice would you give your younger self about to enter the “real world?”

In medicine, we always tell students to get as much varied experience as possible because you never know when those skills will be necessary or how knowledge in one area can “cross-pollinate” your work in another. Choose something meaningful for your work. I have plenty of frustrating days, but playing a small role in bringing new drugs to countries around the world and seeing how they have changed clinical care has brought me great satisfaction over the long term. Most important, enjoy it! The real world is filled with great colleagues and interesting things to do.

How has DIA helped you?

When I first started my career in the pharmaceutical industry I had very little experience in regulatory science but immediately felt the weight of responsibility we carry during drug development and post-marketing to maintain compliance in a highly regulated, international industry while advancing science for the benefit of patients. DIA meetings provided a venue to increase my knowledge of best practices while benefiting from mentoring and advice from DIA members from industry and regulatory authorities who had decades of experience and a commitment to advancing medical care.